On November 23, 26, 2018, directed by state administration of cultural heritage, the Chinese association of museum, museum of natural science association of China, China association of museum marketing and public relations professional committee to undertake the eighth China museum and related products and technology expo (hereinafter referred to as "expo"), the strait in fuzhou city of fujian province held a grand international conference and exhibition center.613 domestic museums and enterprises participated in the exhibition, foreign guests from 42 countries attended related activities, and the total exhibition area reached 50,000 square meters.Datangxi Museum was invited to participate in the exhibition and won the "Best Exhibition Award" of the Expo. 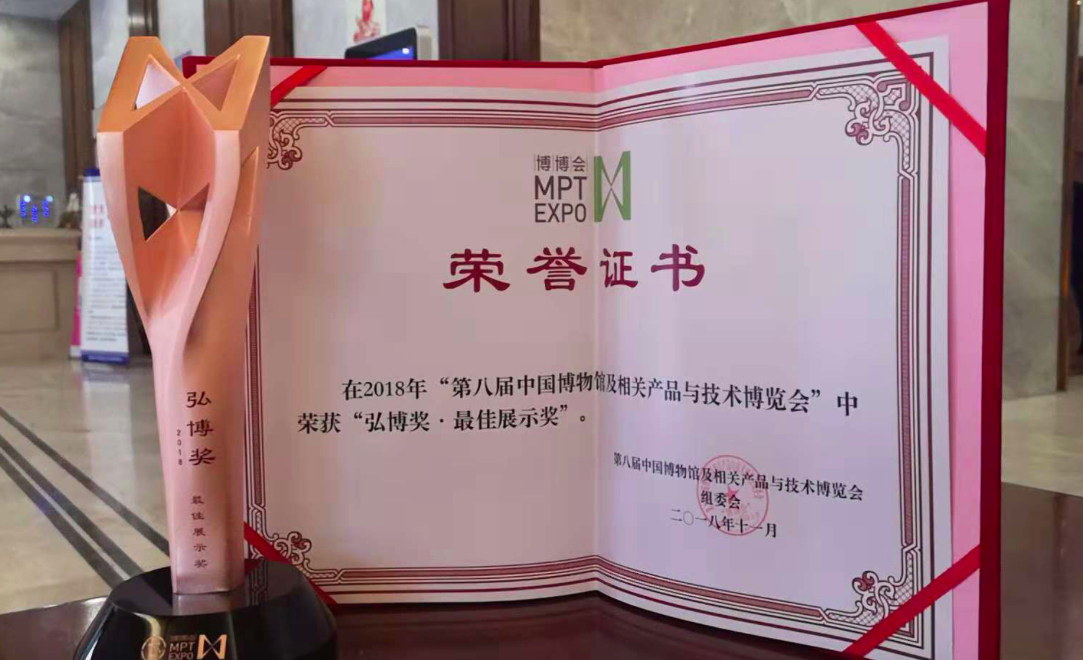 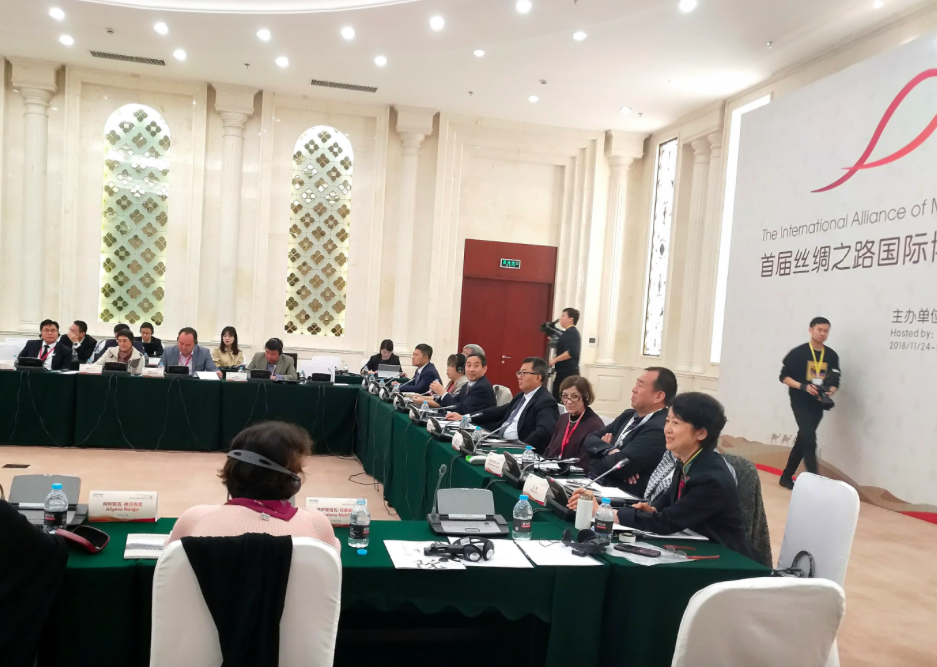 Director Liu Yuzhu pointed out in her speech that this exposition is not only a systematic review of the development level of national museums, but also a gathering of wisdom and encouragement for the development of museums in the future.

The "expo", bo association professional committee of non-state-owned museum in China, under the organization of its collective 76 non-state-owned museum, museum of datang west city as a non-state state-level museum exhibition area is located in the A8, stadiums, following the national Palace Museum, national museum, respectful wang fu after state museum, near non-state-owned museum professional committee, reveal the vitality and character of the non-state-owned museum, museum of unique design, the integration of the construction of the museum building outline style and the silk road culture theme decoration, embodies the concept of green, environmental protection and fully modern, break the traditional pattern of structures, whimsical,Stand out in the entire exhibition area, attracted a large number of visitors and friends, in the industry experts, business experts and the public by the high praise.

Wenchuang West City, Silk Road business soul.Datang west city museum and based on the silk road starting point, from the Angle of the museum in the past, present, and future multidimensional shows datangshengshi culture connotation of the silk road, and introduced a pocket museum, the audience can directly download the client computers, mobile phones and independent visit the museum of cultural relics and no dead Angle of 360 degrees of amplification, from the whole to the detail.Next, you will scan the code "Bring Home Cultural Relics" to experience the zero-distance dialogue with culture.We have independently developed more than 20 kinds of cultural and creative products, including clothing, daily necessities, stationery, creative gifts, etc., which skillfully use silk, ceramic, metal and other materials as carriers.As soon as the cultural and creative products were on display, they were fanned by everyone because of their special ornamentals, beautiful shape, affordable price and excellent quality, and were snapped up and booked one after another.Due to the show-oriented nature of this blog, it is not possible for every visitor to take away their favorite objects on site. The museum can accept reservation, or you are welcome to contact us later. 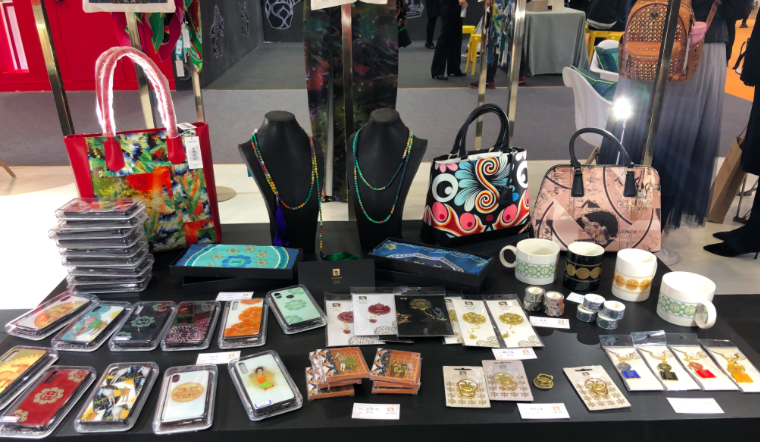 In addition to the gen, academic research is one of the important achievements of the museum, the museum follow closely the pulse of The Times, explore the strong support of long-term construction and development, datang west city museum publication of "the silk road international museum friendly conference proceedings, and more than the epitaph datang west city collection research, a number of industry experts and culture fans ask and showed a great interest in order. Through cultural exchanges and cross-border cooperation with countries along the Silk Road, through academic conferences, exhibitions and exchanges of advanced experience, the Museum of Datang West realizes the exchange of resources, promotes the rapid development of international museums, and promotes the exchange and mutual learning of world civilizations.

Wang Bin, curator of Datangxi Museum, attended and was elected vice president of the Alliance

November 24-25, the first of the silk road international museum union general assembly (hereinafter referred to as the conference) during the period of "fair", at the fuzhou international conference and exhibition center successfully held strait, from 12 countries 17 members of the unit for exhibition conference jointly signed a cooperation framework agreement, the conference discussion by the articles of association of the league, and in 25 at the closing ceremony, all the members of the national museum conference jointly signed the first silk road memorandum alliance agreement. The curator of Datangxi Museum attended the conference and was elected as the vice president of the alliance. 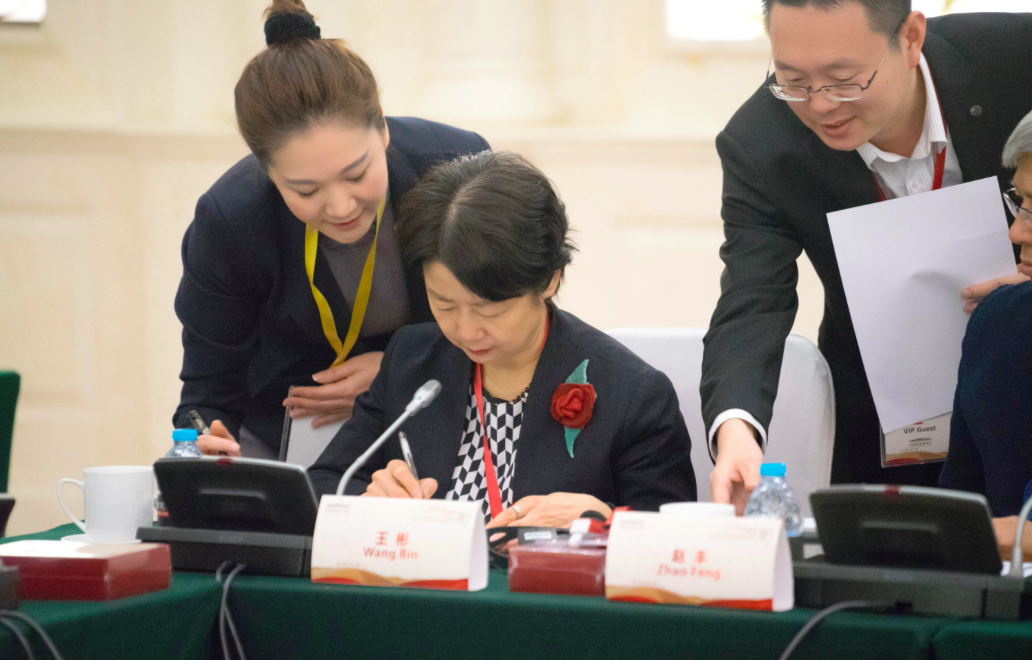 Wang Chunfa, the president of the Alliance, pointed out in his opening speech that museums have a unique cultural interaction, and the construction and development of the International Alliance of Museums demonstrates the sense of a community of common destiny, sharing rights and responsibilities in the same boat. He proposed that all members of the alliance should adhere to joint contribution, shared benefits and win-win cooperation to benefit people of all countries along the Belt and Road and promote the building of a community with a shared future for mankind. 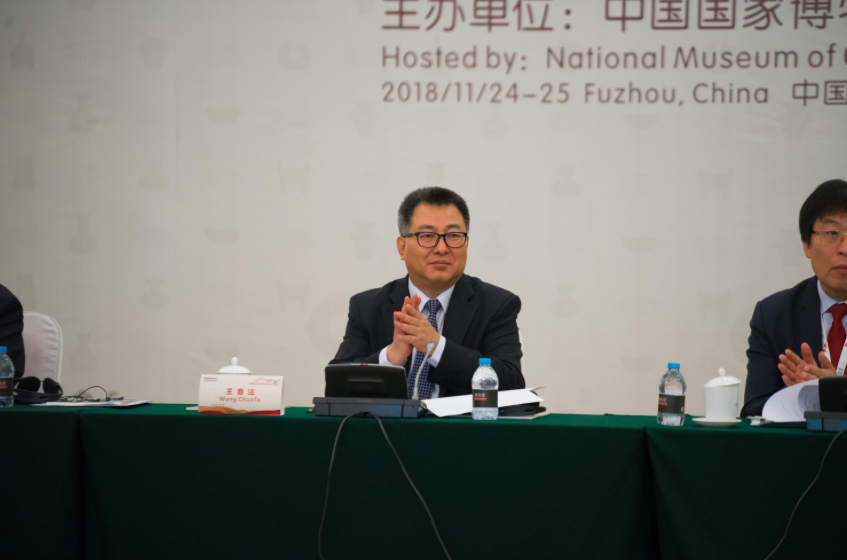 Wang Chunfa, president of the alliance

GuanQiang, vice minister of China's state administration of cultural heritage, the Chinese culture and tourism, international exchanges and cooperation, deputy director of zhu q, vice mayor of fuzhou city fang hj, for alliance and delivered a speech to the delegates, the arrival of the guests expressed welcome and congratulations on union general assembly convened for the first time, hope to enhance alliance to build the international influence of "area", etc., to attract more countries involved, along the alliance members to take full advantage of alliance platform, continue to deepen cooperation, complementary advantages and common progress, open up a new channel of the silk road culture mutual learning.

During the meeting, vice President of datang west city museum curator, union report Mr. Wang communication, as the country's first private site class museum, in the actual operation of the achievements and problems, especially in non-state-owned museum in the country of the silk road culture theme museum grasps own professional norms, play its vitality and superiority. We hope that there will be convergence and convergence among the Alliance, and that different museums will have their own priorities. We will actively cooperate with the Alliance and continue to make efforts to build an international exchange platform and mutual learning between world civilizations.

Through this conference, the league's museum will practice "peaceful cooperation, open inclusive, learn each other mutual learning, mutual benefit and win-win" spirit of the silk road, build consensus, actively explore in the countries along the silk road in the areas and the subject in the field of cultural heritage exhibition, information sharing, joint research, professional personnel exchanges and personnel training, promote along the museum international cooperation between countries and regions, and strengthen the museum related contact and cooperation between international agencies and organizations, and improve the social awareness and participation of cross-cultural exchanges and cooperation, realize the hearts and minds of mutually on the silk road.

The conference also launched the official website of the International Alliance of Silk Road Museums (www.musesilkroad.org) to enhance information exchange and resource sharing among member institutions of the Alliance. All the participants participated in the launching ceremony of the alliance website. At the same time, the conference announced the time and place of the next conference of the Alliance. The Second Alliance Conference will be held in Beijing, China in November 2020.